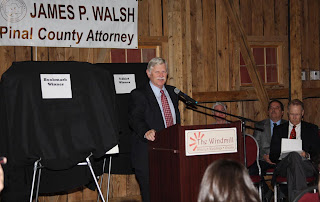 "This is a special year for us. We celebrated the 20th Annual Anti-Drug Poster
Contest," Walsh said. "Over 1,300 entries were received this year, up from 1,000
last year. First the field is narrowed to 60 finalists. Once those were chosen nine
winners were selected by an independent panel of 11 judges."

This year's grand prize winner, Annabel Ybarra a sixth grader from Casa Grande
Middle School won a $500 prize for her school. Annabel also received her poster
framed with an engraving of her name, school and year of her success.

The T-Shirt winner is Vanessa Olivarez from Cactus Middle School of Casa
Grande. About 100 T-Shirts with her art-work on the back were printed and given
to all 60 finalists of the contest and other participants.

The Bookmark winner is Alejandra Alegria from Red Rock Elementary School.
Her drawing was reproduced in the form of bookmarks and which will be
distributed to sixth graders throughout the county.

All nine artists won an expense paid trip to the Challenger Space Center with
their classmates.

The contest is open to all sixth graders in Pinal County.

Mr. Walsh was at hand to honor finalists, their families and teachers at a
ceremony in Florence where he unveiled the 2011 Anti-Drug Poster Calendar.
Almost 1,300 students sent their anti-drug art to the Pinal County Attorney's
Office continuing an effort to educate children and families on the dangers of
drugs. This effort started in 1990 with Roy Mendoza then Pinal County Attorney.
It began as a small art contest in local schools to find out who could draw the
best anti-drug message.

The contest was named in memory of former Pinal County Superior Court Judge
Robert R. Bean who had succumbed to cancer.

Speaking before a group of student finalists and their parents at The Windmill in
Florence, Walsh congratulated all those who participated in the effort to reach
their peers with effective anti-drug messages.

The guest speaker of the night was Judge William J. O'Neil, former Pinal County
Superior Court Judge. Judge O'Neil has been appointed by the Arizona State
Supreme Court as the first Presiding Disciplinary Judge for the Arizona Bar
Association's members. He spoke of the dangers of drugs and related his long
experience of dealing with drug related crime.

The 2011 anti-drug Poster Calendars will be distributed to Pinal County schools
and businesses.