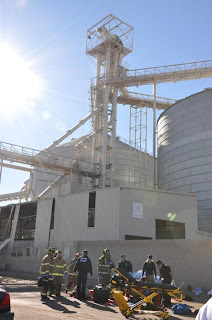 Fire crews from Goodyear, Gila River, Maricopa and Phoenix responded to a series of explosions at Arizona Grain this morning that left three men with serious burns, requiring air evacuation.

"The force of that explosion should have killed at least one of those men," said Tom Randl, an employee of Pinal Feed, which is located next to Arizona Grain.

Maricopa Police spokesman Sgt. Stephen Judd was at the scene said that the explosion was caused by the ignition of grain dust, but that it was not clear what caused that ignition.

"Sometimes just static electricity will cause these explosions," Judd said.

However, Randl said that he had seen a man on top of one of the elevators welding just several moments before the explosion occurred. "He had finished the welding and lowered the equipment when the explosions occurred," Randl said.

At the scene of the explosion the damage was clearly visible. A pipe used to bring grain in from the train to the feed store collapsed, the tops of two elevators were blown off, as was the side of a building.

"My father always told me a grain explosion was dangerous, but I never thought it could be this bad," Randl said.

Randl said when the explosion occurred there was one man on top of a silo and another in his semi-truck parked in the building where the wall blew off.  He didn't know where the third man was.

He stated that two of the men injured were truck drivers who did not work for the company.

The names of those injured were not released.

Update from MFD Division Chief Mark Boys:  At approximately 9:15 this morning Maricopa Fire Department crews responded to a report of an explosion at Arizona Grain Company located at 38501 W Cowtown Rd. in Maricopa. Numerous other agencies responded as well for automatic aid to the units already on scene. Three workers were treated by Maricopa paramedics on scene and then flown to Maricopa County Medical center with first and second degree burns to their face and hands as a result of the powerful dust explosion.

Fire investigators have determined the origin of the initial explosion was in one of the four vertical grain elevator legs with a secondary explosion reportedly caused by the first and subsequent fireball to the subterranean grain elevator network.

The explosion could be felt and heard throughout the City of Maricopa. The tremendous force of the explosion was such that it sheared six 7/8-inch bolts to a truck scale lifting a semi loaded with grain weighing approximately 80,000 pounds.

According to fire officials on scene it was a miracle the three individuals did not parish in the explosion. They were somewhat shielded from the flying chucks of concrete and metal by a portion of the weigh station. Other employees on scene were obviously shaken by the event but were not injured.

Preliminary fire investigations by Maricopa Fire Investigators indicate at this time the cause to be accidental as a result of routine maintenance being conducted around the time of the explosion. Dust and grain elevator explosions are among the most powerful and dangerous type explosions known to fire service.

As of 1:30 p.m. it was reported two of the three individuals flown to the hospital were in good condition and one remained in critical condition. There were no fire fighter injuries.